Jessica Westhead on learning to let up 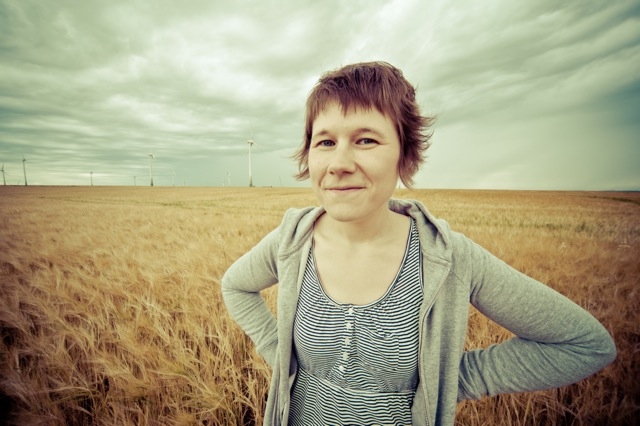 I have always been too hard on myself. This includes, but is not limited to, berating myself for not being a good enough wife/daughter/friend/neighbour/citizen/party guest, and beating myself up for not writing as much or as often as I think I should. Learning to go easy on myself for these and other real and imagined transgressions has not been an easy go, in large part because I seem to possess a gift for finding ingenious ways to thwart my own peace of mind.

For instance, a few years ago, my lovely mother very generously treated me to a day at Ste. Anne’s Spa—an oasis of mandated calm in Grafton, Ontario. One would assume that any sane, thinking person would revel in this rare chance to relax to the fullest. Here was the perfect opportunity to allow my cares to drift away like so much wild-mushroom foam on a soft, ylang-ylang-scented breeze. Instead, I was horrifically uncomfortable from beginning to end.

First off, I resented the uniform. Seriously, they expected us to wander the grounds in a BATHROBE? And be NAKED underneath? Not to mention the unsettling sense that my mother and I, surrounded by so many other white-robe-wearing, blank-faced and blissed-out guests, had unwittingly joined a cult. Furthermore, I am not a fan of hot tubs (Too hot! Too much water pressure on sensitive areas!), massages (Too touchy! Too much hand pressure on sensitive areas!), or yoga (Too flakey! Plus I am fearful of snapping my neck during neck-related poses), so my options for treatments were limited. I chose a solo foot massage because I figured with that route, the roving hands would have less ground to cover—but then I didn’t consider the tickling issue (stupid, stupid), and a group meditation session with my mom.

Oh, the meditation session. It was doomed from the start because I was a few minutes late AND I wore my flip-flops in. The instructor took time out from lulling my fellow meditators in order to scold me for both of these things. And so immediately I decided I hated him, and that I would rebel by absolutely NOT permitting his super-annoying voice spinning tales of crashing waves and soaring seagulls to unwind me even slightly. I would also close my own eyes, thank you very much, and would NOT be putting one of his stinky bean-bags on my face. I left the meditation session—and our spa day—stressed out and pissed off. Except for the miniature sandwiches. The miniature sandwiches were good.

Since then, though, I’ve arrived at the realization that this sort of self-sabotaging behaviour is counter-productive. As an added bonus, when I loosen my grip on myself, there’s also a loosening of ideas. Here’s proof: After my baby daughter (our first) was born this past August, I told myself that I wouldn’t worry about writing any new fiction for one year. And then lo and behold, I wrote a new story when Luisa was nine weeks old! It’s a short one—only five pages—but I quite like it, and I just found out it’s going to be published in an upcoming issue of EVENT Magazine!

I know now that with my writing, the (sometimes alarmingly long) fallow times between my productive periods are normal—and inescapable—for me. When I finished my short story collection And Also Sharks, I panicked that I hadn’t started a new project yet, and confessed my anxiety to a wise friend. Right away she grinned and told me, “You said the exact-same thing after you finished Pulpy & Midge. And then you wrote another book.”

I still don’t like yoga, though, because of the neck stuff.

Jessica Westhead’s novel Pulpy & Midge (Coach House Books, 2007) was nominated for the ReLit Award. She was shortlisted for the 2009 CBC Literary Awards, and selected for the 2011 Journey Prize anthology. Her short story collection And Also Sharks (Cormorant Books, 2011) was a Globe and Mail Top 100 Book and a finalist for the Danuta Gleed Short Fiction Prize. In 2012, CBC Books named Jessica Westhead one of the “10 Canadian women writers you need to read now.”