21 Scenes in Search of a Story 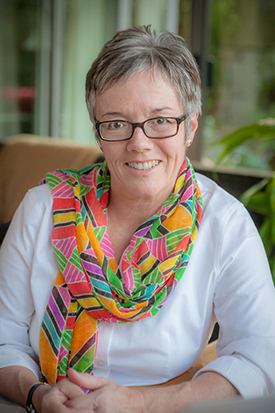 In 2006, as I was finishing the creative writing MFA at UBC, I met a young woman with Down syndrome. Grace told me she wanted to write a new version of Cinderella, one where her fictional self would be a feisty Cinderella-Grace who honeymoons on the Titanic, has three daughters, and becomes a famous spy. From our first meeting, I was moved in a way I didn’t understand. But I knew I wanted to help Grace and tell her story.

A few months later, I started a personal essay. Grace on Fridays, I called my first draft, since Grace and I often met for an hour or so on Friday afternoons. I described how Grace usually had 5 to 10 pages written, how she moved from writing by hand to using a computer, how we talked about things I thought I’d never talk about with her – point of view, dialogue, structure. The week after we talked about point of view, she changed her story, by then about 40 pages long, from the third person to the first person. It now began Once upon a time, there was me.

I produced draft after draft of my essay. Within a few months, I had over a dozen digital versions languishing in a folder called Grace. Each draft petered out into doubt and confusion. What was I trying to say? What was the story? 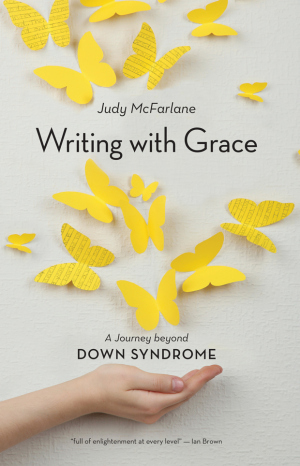 I decided structure was the problem. At the time, Grace was studying karate, so a new series of draft essays sported the title, 21 Moves, reflecting the fact that Grace was trying to master a new kata, a series of 21 linked moves. I liked how this resonated with Grace’s chromosomal reality, an extra copy of her 21st chromosome in every cell. But this change still didn’t capture how I felt about Grace and our work together. By now I’d been writing my essay for over three years. I felt like I was struggling with my own kata, a series of linked essays I had to master before I could move on.

Finally, I took the latest version of my essay to Banff’s Wired Writing program where I worked with the novelist Joan Thomas. She read my essay and put it aside. Tell me what your story is, she said. And then she asked the question that felt like a burst of brilliant light on my failed essay attempts: what part do you play in this story? I realized I’d been resisting putting myself in the story. In that moment, I saw clearly that I was part of the story and that I was writing something bigger than an essay. Possibly, even though the thought seemed daunting, a book.

Over the weeks I worked with Joan, a first draft of my book began to appear. It was rough, unpolished, and lacked a narrative arc. I knew I had to find a way to pull it all together, but I didn’t know how. Again I wondered, what story am I telling? Why was I so moved by Grace’s efforts to write? Why was I so drawn to her, even though initially I thought it was impossible that she could write? Why did her words, I want to write, hook me so powerfully?

Slowly, without trying to think what form it would take, I began to write my way towards understanding. I wrote about a day when I’d been only slightly younger than Grace and I’d stood outside the door to the Creative Writing Department at UBC, knowing it was the place I longed to be. And how I was unable to open that door and turned away with a deep sense of disappointment. I wrote about how my mother, who’d had to drop out of school during the Depression, became a voracious reader, how she’d told me she wanted to write, but never did.

I began to show up in other places in the story, some of them very uncomfortable. I wrote that my initial hesitation to meet Grace wasn’t just about thinking she wouldn’t be able to write, but about something more disturbing - that she might become frustrated, angry, maybe even lash out. I tapped into a submerged well of fear and ignorance, one I could have easily ignored if I’d never met Grace.

But I still had a disjointed story that didn’t flow smoothly from one chapter to the next. You need an outline, my writing friends said. I tried over and over to create an outline. Then another friend, Fiona Tinwei Lam, pointed me towards JJ Lee’s memoir, The Measure of A Man: The Story of a Father, a Son and a Suit. See how he moves seamlessly (ha! we said together) from one short section to the next? You could do that.

And so I got rid of my 27 chapter headings and began to think in sections, each one leading organically, I hoped, to the next. Slowly a dramatically different manuscript began to appear. I wove together Grace’s dream – I always dream to be a famous writer – with my own dream of writing, given up when young and now alive again. I folded in my daughter’s dream to become an actor as a contrast to Grace’s story and my own. I wrote about how Grace had said the words –I want to write - I hadn’t been able to say when I was her age.

I found another mentor in Claudia Casper, who told me to write a bigger story. I began again, producing another draft. My long time writing group (we call ourselves the Lying Bastards) urged me to keep going. By now I’d lost track of how many years I’d worked on this story. But it didn’t matter. I knew I was going to finish it and somehow find a way to send it out into the world.

Looking back, I can see that by telling myself I was writing an essay and that I wasn’t part of the story I made it impossible to tell the real story. What helped me in the end was letting go of the limitations I’d set up for myself and finding the tenacity to keep going, to realize that one draft was leading me to the next. Even more, with the help of friends and mentors, I found the courage to tell the real story, one I wrote, I hope, with some grace.

Judy McFarlane began writing in midlife, when she completed an MFA in creative writing at UBC. She’s published fiction and non-fiction, including several radio documentaries for CBC.

Her non-fiction has appeared in The Globe and Mail, the Vancouver Sun, the Readers’ Digest, and several anthologies. Her non-fiction piece, After, and Before, was a finalist in CBC’s Canada Writes. Her fiction has been long-listed for the Journey Prize. She has also worked as a writer-in-residence in schools in Vancouver and Northern Ontario, helping students write plays about issues important to them.

She lives in Vancouver with her husband and their small dog. They have three grown children whom they welcome whenever they return home.